Saoirse catches up on some sleep

Our baby girl, Saoirse, made her debut on the world stage on 21 November at 11:11 hrs. She is prodigiously talented and stunningly beautiful. “There’s only one beautiful baby in the world, and every mother has it,” commented a midwife down in Queen Mary. I’ve lodged an official complaint and will not rest until that bitch is FIRED. There’s simply no excuse for that level of prejudice and ignorance in a healthcare professional.

Unfortunately, in the photos Husband took in the recovery room, Saoirse is virtually obscured by the great flobberfest of funbags – which kind of defeats the purpose. On a related note: instead of capturing me tiredly stoic but luminous, confoundingly gorgeous despite being makeup free, I look so spectacularly haggard that it’s hard not to draw the conclusion that my husband hates me.

However, since that would be seriously bad timing, I’m focusing on how tricky it must be locating anyone’s best profile when they’re shiny and covered in vernix and re-adjusting to the re-internalization of their intestines.

Saoirse at one hour old

Saoirse gazes at me as if we’ve met before and she’s trying to place my face. Thankfully, this unsettling effect is offset when she blows bubbles out the side of her mouth.

Ok, now, look: I never fully got over the shock of finding myself pregnant again – especially since, if there was any sex involved, well, I certainly don’t remember it. In many ways I felt more prepared for Finn’s arrival. Or perhaps that should be ‘ignorant’.

In contrast, my second pregnancy felt like one long, torturous, acid-reflux-fuelled panic attack. Leading up to the birth there was no limit to the number of things I stressed about, including: whether my kidneys would ever recover from the skilled and precise foetal pounding sustained over the previous five months; how Finn would cope with involuntary promotion to big brother; my rate of recovery after a caesarian; whether Andrew was lying about taking two weeks off work after the birth; and – a particularly horrifying thought – that my daughter might take after me. Oh, and also DEATH; not only mine, but anyone else perishing while I was on the operating table. Because, you know, PEOPLE DIE – and not only old ones.

But what concerned me most, throughout the pregnancy, was that I wouldn’t love my second child as much as Finn.

Friends told me this fear was fairly normal, but it CONSUMED me; I love Finn so viscerally it seemed impossible I’d have enough left over for a second child.

Of course, what turns out to be impossible is trying to quantify love.

I am besotted with my daughter. 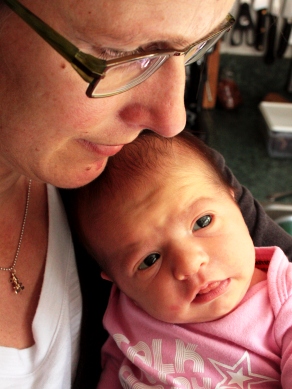 Ok, I grant you this may be unexpected. This is possibly the first post brought to you by the jubblier parts of my anatomy. I’ve always prided myself on being a closet prude (as documented here).

However, IVF strips away much of your modesty, and breastfeeding pretty much sucks away any that remains. You know your personal boundaries have undergone a subtle shift to the region of Albania when you greet the Fastway courier with a funbag flopped out.

In fact, recently I’ve wondered what I’ve been so precious about all these years. There’s nothing special about my norks. They’re round, squishy, kind of furry in the colder months. See? Same as everyone else’s.

So. When I was pregnant, Andrew and I discussed how we would feed our child. Formula? Breast? Throw a few bones into the garden and let him fight it out with the dog?

In the end, the decision was clear: buy a big box of chicken necks and . . . HAHA ONLY JOKING, PLUNKET NURSE! You know: joke? Something said or done to provoke laughter or cause amusement, often culminating in a punchline which is why mine might have confused you? Ok. Sorry. Please don’t alert Child Welfare Services.

No but SERIOUSLY, it seemed willfully irresponsible not to breastfeed Finn. It’s the most nutritious source of food; boosts the immune system; allows the baby to regulate his own supply; and is fully supported by the Ministry of Health and its associated minions.

In fact, the MoH’s informational material was positively inspirational. The promotional DVDs featured joyful women leaping through waves with their infant swinging from a nipple. Breastfeeding is the most natural thing in the world, they aggressively stressed. And totally painless if you do it correctly.

Well, you can call this a public service blog post. I’m here to shatter the conspiracy of misinformation.

My first pet name for Finn was ‘Sharkattack!’. He may have had no teeth but could have gnawed through my upper torso with his razor-sharp gums if I didn’t hold him back. I’m not sure why we bother with a bassinet when we could simply affix a silicone tit to the wall and sucker him onto it.

Also, it didn’t help that within 24 hours of Finn’s birth, I’d had at least five people man-handling my chest (not including baby-handling). These included the anaesthesiologist in the operating theatre – which I can only compare with a tax consultant reaching across his desk to grip you by the boob and give it a rare squeeze while discussing personal wealth and asset planning.

Although there was no doubting the passion, dedication and absolute conviction of the midwives and lactation consultants at Dunedin’s Queen Mary, they all offered conflicting counsel. I was variously advised to latch the baby by gripping him by the shoulders, neck and head (although not all at once). One suggested letting Finn latch himself – “Guiding him to the breast is a mechanical act. After all, you don’t see lambs being attached to a teat with a great big hand.”

She seemed unmoved when I pointed out that sheep weren’t equipped with hands.

One lactation consultant had transformed vagueness into an art form and stood by my bedside twitching and wincing as I practiced putting whichever hand it was somewhere and waiting until ooh- aah- the baby sort of oohaah- yes- no- that’s not right- um.

Here’s the low-down: unless you routinely engage in sex play relying heavily on nipple-clamps, chances are breastfeeding will hurt for the first few weeks. Frankly, I think it’s immensely disrespectful to women to pretend otherwise.

Instead of the relentlessly positive propaganda, I would like to have been trusted to make the right choice for Finn and me in the face of the horrifying truth. Despite the blood and shreds of tissue, I’ve always been aware how incredibly special it is to be able to nourish my baby.

And I’d rather have been prepared for it, rather than wondering whether there was something wrong with Finn and me.

Finn at five weeks. ONLY KIDDING ABOUT THE DOG TOWEL, PLUNKET NURSE!

On Saturday, Husband and I went to Dunedin to catch up with friends. The weather forecast threatened thunder and lightning. In other words: ideal biking weather, according to Husband’s criteria.

Just beyond Palmerston, the first drop of rain smashed into my visor. Although our jackets are ‘weather-proof’ (whatever that means, it doesn’t appear to include protection against heat), our kevlar jeans are only gravel-proof. We stopped to pull on over-trousers.

Ten kilometres on, I was experiencing sound effects similar to being kicked by a herd of rhino in a kettle drum. The hailstones were the size of pingpong balls – although rather more substantial. Husband pulled into a bus-stop, but got bored after about ten seconds.

“Easing up? I can’t see the <expletive deleted> ROAD.”

So much for the scenic route; although in fairness, although it seemed like longer, we probably only had about twenty minutes of inclemence.

Our bike gear was quite effective. The main problem I had was with my motocross gloves, which were instantly soaked. By the time we reached Dunedin, my hands were frozen into claws.

I suggested this problem could be addressed by the purchase of rubber household gloves to wear on top. It is tremendous fun torturing Husband with this terrible threat; it is impossible to describe how aghast he looks when I tell him I plan to get pink ones.

In the end, MarkJ donated his leather gauntlets with total funk, so Husband will be spared that horrible fate. For now.

Upon our return on Sunday, we found out that we had ridden through a tornado which was  so terrifying, it frightened Mr and Mrs McLeod’s cat