Lesson 1: how to slice with a ski pole

Intrepid explorer (don’t be fooled by the beanie)

After days of rain in Kenmare, and snow up country resulting in the daring rescue of a busload of tourists from the Wicklow mountains, this morning was a surprise.

The day was lovely and bright and crispy. Dad and I decided to walk up the Lack Road from the Bridha Valley. Looking north from the Ballaghbeama Gap to the Valley, the Magilicuddy Reeks were framed against a perfect blue sky.

The Magilicuddy Reeks. The mountains frosted with snow are Caher (left) and Cumeenmore (right)

Dad is a menace with a pair of ski poles (although technically, the man doesn’t need a pair of ski poles). I was lucky to escape with both eyeballs. The thrilling accuracy with which he flicked the pole up at the end of a stride cannot be accidental.

At the top of the Lack Road, we had some Nice biscuits and mint crisp. Then we turned east towards Curraghmore Mountain. After slodging through a bog, we scrambled up a jumble of rock towards the cairn marking the summit of Curraghmore.

The route ahead: Curraghmore Mountain is the highest peak in this photo, although admittedly it is more a trick of perspective 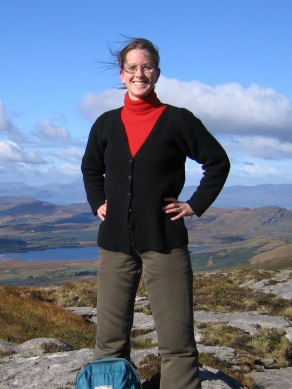 Picture by dad; me and Lough Acoose. Dingle Peninsula in the background. Also, my thighs aren’t really that big; it’s the wind, I swear to god, it’s the wind. Husband tell them, please.

Clouds collected and struck poses and looked threatening, but they didn’t venture below peak level. It was like watching a slide show.

Caher seemed but a short uphill sprint to our left, but my father hasn’t been on a walk this technical since his last hip operation and has a keen appreciation of his limits – although, this was not entirely clear as he descended to Curraghmore Lake.

There is no track apart from the odd set of sheep prints, with steep cliffs on either side of the descent. After the recent rain, much of the terrain was boggy and hanging halfheartedly to the underlying rock. Dad has two artificial hips and a fall runs the risk of dislodging one or both. We took it slowly, but every now and then the sound of dad’s ski pole skittering across damp rock made my heart skitter too.

Had he fallen, I was going to tell mum it happened on the Lack Road and dad used his arms to pull himself over to Curraghmore Lake. 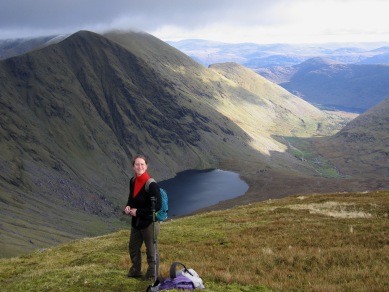 Picture by dad: me and Curraghmore Lake 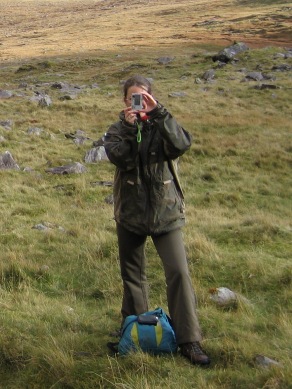 Picture by dad: the reason there are few photos of me 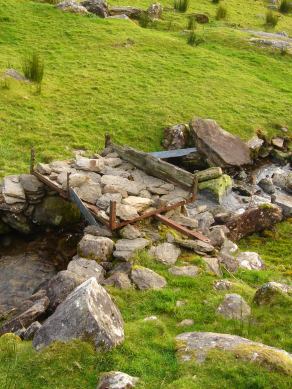 Dusk in the valley

Analysing the appeal of the leading man

On the flight to London, what did the Emirates Entertainment System feature, but The Man From Snowy River.

(NB Apologies to those who do not recognise the grammatical structure of the opening sentence. It is not punctuated with a question mark, largely because it is not a question. It is a correct and recognised statement in Ireland, the socially acceptable response being, ‘Well, isn’t that the feckin grandest.’ If you are paying attention, you will know that is not a question either. I am practicing in preparation for my triumphant return home.) 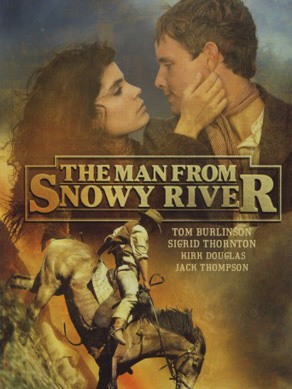 Of course I watched it. I would have done even if the alternatives hadn’t been ‘Run Fat Boy Run’ and ‘Mamma Mia‘. The plot is still far-fetched and flung together unbelievably tenuously; yet it remains the best two hours of distilled corn you are likely to find in this dimension.

For example, the scene near the end, when Harrison makes the mistake of calling Jim Craig a lad – an easy error to make when his voice hasn’t broken yet:-

“He’s a man,” snarls his estranged, impoverished brother. “A MAN!”

When I first saw The Man From Snowy River, although I enjoyed it, I didn’t understand Jim Craig’s credentials as a leading man. Only now, with the benefit of maturity, hindsight and imagination, can I recognise his appeal.

Firstly, although it rather spoils the tension that nothing bad ever happens to Jim Craig, I can acknowledge what an attractive trait this is in a man. In real life, I grew up with a pile of people featuring patriotic quotients of Luck Of The Irish to varying degrees, yet I’ve never come across anyone with Jim Craig’s reserves of pure, unadulterated luck. Even on the rare occasions bad things DO happen to Jim Craig, he resolves them ridiculously easily. His father is killed by a homicidal tree within five minutes of the opening credits, but it’s more a plot device than a serious setback. Jim shovels dung onto the boot of his nemesis Curly, and instead of beating him to a bloody pulp and impaling him on a pitchfork, Curly merely sulks and shoots Jim the occasional dirty look.

If you married Jim, you would have the security of knowing your dreams would always come true and your crops would never fail. If you foolishly toppled over a cliff and improbably landed on a small ledge down an otherwise sheer drop, Jim would turn up to rescue you. And of course, you would get to wear corsets and lace up boots with the cutest little kitten heels.

Secondly, you have to admire a man with the confidence to sport a pair of breeches that tight with legs like his. Even as a teenager, I recall being mesmerized by Tom Burlinson’s chubby little legs, and would subsequently spend years pondering whether his arse was too big even for a man who was supposed to spend most of his life astride a horse. Of course, it is indeed too big – for what is a subject of debate – but definitely for wearing breeches that tight. Yet it is impossible not to give respect where it is due.

I had forgotten Sigrid Thornton’s savage monobrow, and how she enunciated everything through pursed lips. This so inspired me I spent an entire summer talking as if trying to unobtrusively spit out a large morsel of food. No doubt it would have been easier and less time-consuming had I emulated her by simply not brushing my hair.

There is a scene where Jim Craig leaps over the reluctant men and rides down the side of a cliff, shot in silence but for report of his horse’s hooves striking the earth. Overlooking the irresponsible risk Jim Craig took with his life and that of a horse that doesn’t even belong to him, it is still awe-inspiring 26 years later 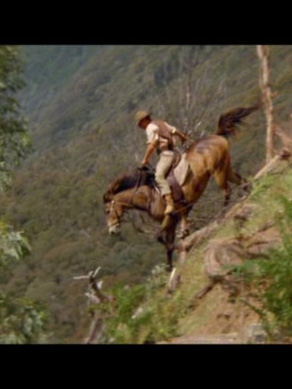 Digestive enzymes of a fly

This morning I cycled to Titirangi. I’ve been threatening the trip for months but haven’t got around to it for a number of reasons, one of which is the rain and another being – hang on, I’m sure there was another. Oh yes, the lashings upon lashings of RAIN.

The first kilometer or so up to Scenic Drive is impossible to cycle unless you’re channeling Lance Armstrong with brass balls, which I don’t that often. It took me half an hour to push the bike up the 5:1 gradient.

I covered the 11.87km down Scenic Drive in the same amount of time. Since we live at the top of a hill, and Titirangi is at the bottom, I thought it was all downhill. Indeed, while that might describe my life, it is not an accurate axiom for Scenic Drive, which never goes around a rise where it can go over.

What I want to know is: when you’re on a bicycle, how come the wind is ALWAYS against you?

I’m sailing down Scenic Drive, thinking: “WHEEE!” and “Hmm. Should really get my brakes serviced,” but also: “That’s quite a headwind. At least it’ll be behind me on the way home.”

The disillusion is affecting my health.

After a couple of hours in Titirangi Library, I returned home via Glen Eden and Henderson Valley. In total, the round trip was 28.27km, which I verified on Google Maps, down to the last two sweat-greased decimal places.

I’m going to have to rethink my backpack. It weighs 7 freakingkg. Half the weight is the heavy-duty <insert pained laugh here> lock that Husband bought to secure the bike; I might as well just carry a safe around and lock the bike in it.

When I got home, I was too exhausted to even remove the quiche from the fridge and cut off a slice. Instead, I lay across the kitchen floor and put my face in the quiche and hoped some of the matter might make its way down my throat. One of the many times I’ve wished I had the digestive enzymes of a fly