As soon as we got home, I started Finn on solids in earnest. Her Goatiness had procured a high-chair for when Finn visited the farm, after researching every last consumer feedback website on the Internet. Happily the cheapie plastic Warehouse variety (Babywise) scored highest on standards and safety.

Her Goatiness offered to buy us a high-chair too, so we borrowed it for a week to see whether it would suit us. Finn was an instant fan, delighted to sit at eye-level hurling toys at people around the table.

Finn in his high chair

It’s not what you’d describe as elegantly streamlined, but it’s functional and stable. Finn fits comfortably in it; there’s a crotch-post to stop him sliding out the bottom; a five-point harness; the chair level adjusts to three different heights; the tray is sturdy and easy to attach and detach; it has castors; and the harness straps are evidently a tasty palette-cleanser in between spoonfuls. I’m confident the baby is secure in it and he’ll sit quite happily for up to an hour if I give him a spatula to bash himself with and wheel him around the kitchen after me.

Husband never likes to commit himself to positive over-statement, but he definitively declared that he ‘hated’ the high-chair. His issues included ‘it’s ugly’, ‘I don’t like green’ (“It comes in orange too,” pointed out Her Goatiness; “Don’t like that either.”), ‘the straps are too fiddly and in fact makes the chair LESS safe because who’s going to spend the time strapping him in when it takes so long?’

Although I have a clear understanding of Andrew’s heartfelt antipathy towards Her Goatiness’s consumer-rated high-chair, I’m still a bit fuzzy about what he DOES want. Possibly an ergonomic high-chair equipped with sensors that detect the presence of baby and automatically straps him in, which would rise up out of the floor in a swirl of dry ice with a majestic, discordant chime of organ notes.

Which would admittedly be TOTALLY COOL.

Andrew showed me a picture of the kind of optimal high-chair he had in mind, which was a limited edition WankyNaff™ high-chair crafted from a single piece of wood from the vulvos tree which grows only on the south slope of a tussock in the tiny Laowunha province during the mating season of the batwing bat which happens once every 104 years.

“Splendid,” I said, “you should jump right on that.”

I thanked Her Goatiness for her offer and authorized her to purchase a high-chair for our use. I didn’t want her to think we’re ungrateful (just her son, which is probably her fault anyway). After all, it was very generous of her – and, realistically, we would probably have ended up with a second-hand chair spackled with dried rice cereal and one leg splinted with a broom handle. I don’t know; perhaps she was conscious of the incongruity of that outcome.

I figured the chances were Andrew wouldn’t even notice.

We’ve been having great fun introducing Finn to food. I started him on mashed banana and cooked, pureed apple – a couple of tablespoons at a time.

Initially he was enthusiastic if uncomprehending; it took a while before he realized he couldn’t fit both spoon and his fingers in his gob. In fairness, we also underwent a learning process. I’d always thought a spoon was for conveying food to mouth; but in Finn’s case its application is primarily scraping overspill off his chin. Also his nose, cheeks, forehead, hair and surrounding furnishings.

Finn’s interest waned when he hurdled his boredom threshold after a couple of days. However, I’ve added more to the menu and kept it varied. Now, when we put him in his high-chair at the table, he sits with his mouth open and extends a squirming, questing tongue until the food arrives.

The only thing he turned down was a Watties teething biscuit – and honestly I don’t blame him. I tried one myself and am sure the packaging is tastier and likely more nutritious. I tracked down some Farley’s rusks in the international food section of the supermarket. Although Finn loves them – he’ll spend half an hour solemnly gnawing a rusk to a sticky paste and applying it to his hair – I just don’t have the strength of character to handle the mess. I’m still finding spatches of rusk adhered to random surfaces: the baby monitor, my laptop, the dog’s collar, the kitchen wall.

Here’s a video of Finn about two weeks ago during dinner: LOOK NO BIB!

That’s our definition of daring these days.

Effluent challenge greater than ever

We came down to Oamaru to spend Easter Weekend with the Outlaws. Once we were here, it seemed pointless driving home only to return for the opening of duck shooting. Why not stay and kill two birds with one stone and maybe even an Easter bunny? Or better still, use a rifle.

Ok look, unless you’re vegetarian, I don’t want to hear how cruel hunting is, or how ducks probably don’t think it’s much of a sport (which is hardly surprising not having much in the way of higher intelligence). The living conditions of many domestic animals are appalling and the transfer and processing are crueller than a clean bullet through the head. We can duel if you disagree. (Except I don’t shoot stuff.)

While I’m on the subject, wasn’t the Royal Wedding simply lovely?

The Outlaw’s farm is like our second home. Agent of Death makes a terrific gin and tonic. The tangy aroma of fried fish first thing in the morning. A brown dog multiplied by a factor of three. And I’ve never come across a range of reading material in a bathroom more energising to the lower intestine:

My bowels have achieved an efficiency and precision that is, literally, moving.

Sadly, the same cannot be said of our dog. The change in his diet – goats milk, deer tongue, putrid rabbits – has resulted in some terrifying emissions from his butt. Sometimes opening the bedroom door in the morning sends a shock-wave sweeping through the house.

The other evening, Husband and I took Jed down to Cozy Dell, known locally as Nooky Cove, to wash off some of his insulating crust of cow shit. The temperature was perky. However, the light was gorgeous, with the late sun slanting low through the trees.

Husband's builder's bum was a bit camera-shy that day.

'Thank you' is Jed's command to give up whatever's in his mouth. For a dog, he has beautiful manners. 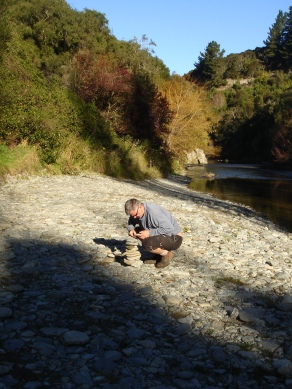 Husband builds cairn. Only because he knocked it over in the first place.

Jed waits for the off.

As a bonus, here’s a couple of vids of Jed diving for his water-logged tennis ball. He hasn’t QUITE figured out how to breathe underwater. Yet.

Jed lets Husband know just how cold the water is:

Husband and I, listening to an advert on the radio for ‘Fuzzy Cleaners’.

Me: See, I think that’s a GREAT name for a cleaning company.

Me: Well, you don’t want to call your cleaning company ‘Grime Busters’. Because nobody wants to think their home or office is grimy. And it’s catchy. Easy to remember: ‘Fuzzy Busters’.

Me: What were they called again?

I don’t cry at movies – apart from Finding Nemo because doesn’t everyone? Also anything starring Tom Cruise, but that’s a visceral rather than emotional response.

I’m much more susceptible to an intense, emotionally manipulative advert. Like the National Bank ad showing at cinemas here that always made me choke on my Malteser, and this one  from NZ Post always mists me up – although more light condensation, really.

However, when I was back in Ireland, there was an advert on telly that showed frequently. In it, the camera shows a Labrador, slumped in a small, bleak cell with bars across the front. He’s bored and lonely and quite obviously hasn’t chased a ball for what might be DAYS. Suddenly, his dull eyes spark; the ears prick; he jumps up, mouth falling open, tongue lolling; he darts to the front of the cell and sits eagerly; tail thrashing; he strains to see past the bars.

As People approach his cell, he looks up hopefully. And as they pass by barely breaking stride, his little ears sag, the tail wags ever more feebly; and as they walk out of frame, his whole body droops in defeat.

Sorry; did you say, what was it FOR? I have no idea. It seems reasonable to assume it was for K9 Friends or cell manufacturers or some such.

Every time this advert showed on telly, it reduced me to tears. One moment I’d be sitting there cynically monopolizing my parents’ Sunday Times magazine; the next choking back seismic sobs on the sofa.

I suppose it might have had something to do with missing my dog at the time. Also because Jed strives so hard to please me (when he isn’t distracted by a moving tennis ball); and looks at me like I’m the most wonderful thing in the world. I mean, Andrew stopped looking at me like that long ago – around the time he discovered me biting my toenails in the kitchen.

(Well, most of my boyfriends were TURNED ON by that.)

ANYWAY, I am grateful I no longer have to see that advert because it was pure embarrassing.

Then the other day, I was reading The Knife of Never Letting Go, by Patrick Ness. It’s an AWESOME BOOK, and I would recommend it unreservedly but for the fact that it ends on a cliff-hanger and now I’m completely stressed that the sequel is out on loan at the library until NOVEMBER.

So the protagonist, Todd, has a talking dog called Manchee. The villain, Aaron, is trying to kill Todd and Viola, when Manchee attacks him and gnaws his face long enough to allow Todd and Viola to escape in a boat. This is the relevant passage:

And Manchee looks up from Aaron to see me calling him-

And that’s where Aaron takes his chance.

He grabs Manchee violently by his scruff, lifting him off the ground and up in one motion.

And there ain’t no choice-

And the boat’s out in the current-

And I look at Viola, still rowing against it, tears dripping off her chin-

She looks back at me-

And there ain’t no choice-

And I put my hand on her arm to stop her rowing. The current takes us.

“I’m sorry!” I cry as the river takes us away, my words ragged things torn from me, my chest pulled so tight I can’t barely breathe. “I’m sorry, Manchee!”

“Todd?” he barks, confused and scared and watching me leave him behind. “Todd?”

Aaron brings his free hand towards my dog.

And Aaron wrenches his arms there’s a CRACK and a scream and a cut-off yelp that tears my heart in two forever and forever.

Well, I wept for a good ten minutes. When I finally unwracked, I was compelled to track down my own dog for lots of extremely reluctant cuddles.