But he’s definitely a Canon

Reverend* Shaw, aka ‘Dad’: I went to church this morning.

*I’m not sure whether dad’s a Right Reverend, but he should be since he is often accurate especially when discoursing on fauna.

Q: What is worse than big tobacco? A: Begins with ‘S’ and ends with ‘lingshot’

For nearly two weeks, I have been lost without Internet access. It’s been a disaster. I haven’t been able to use my landline, update Deadlyjelly, check email, surf Wikipedia, buy crap on Trademe, find out the history of fleur de lis, look up Maori face tattoos, view photos of drunk strangers on Facebook, or research the reproductive cycle of the fruit fly.

On the upside, this has freed up HOURS every day; in the region of six. I have done loads of writing.

This morning, Slingshot called to tell me I was back online. ONLY KIDDING! Haha, got you there. Of course they didn’t, because that would involve a modicum of proactivity and/or basic customer care.

Instead, I fought the crushing miasma of despair and hopelessness to fire up my browser in the unlikely to improbable event Slingshot had fixed the problem. I mean, last Saturday during my bi-daily call, I was told I would be back online within 24-48 hours, but that’s one of the things they say to snuff out your will to live. Because it’s not as if I hadn’t heard it before – on no less than five occasions during the previous 12 days.

Of course Slingshot offered to recompense me for any downtime and inconvenience. ONLY KIDDING! They agreed to refund $40, which covers maybe one of the international phone calls to my mobile from Husband who is currently in Dubai – and I had to call them to request the rebate. At least I wasn’t on hold for half an hour – ONLY KIDDING! Goodness, the laughs just keep coming.

Slingshot is evil. If you are employed by Slingshot: shame on you. Why don’t you go and work for a more ethical company, like big tobacco or a munitions manufacturer?

The wedding: Róisín and Tim

I don’t know why, but that’s what they will always be. Róisín and Tim. Never Tim and Róisín, which would be as abnormal as a river flowing uphill, or having sex after marriage.

The cake: photo for my mum, who had no interest in the happy couple whatsoever, but issued strict and specific instruction to return with photos of the cake from 129,600 angles so that she can imagine it in full three dimensions. (Mum: 129,599 photos to follow.)

Considering we didn’t topple into bed until the wee hours, toppling out at 07:30hrs the following morning was a stunning effort, I felt. Since I wasn’t sure whether I’d get a sniff of lunch, I wanted to fortify myself with breakfast, before official bridesmaid duty commenced at 09:00hrs.

Afterwards, Husband reinstalled himself in bed and I went to see what sort of pre-wedding nerves were loose in Róisín’s suite.

The NASDAQ composite index fell 11% when our bouquets were delivered and Róis didn’t like hers – and while she was at it, she wasn’t mad keen on the bridesmaids’ either. Specifically, her bouquet was too ‘structured’ and didn’t feature enough foliage; while the remaining bunches were ‘too pink’.

Her sister and Maid of Honour, Fiona, and I were preparing to spruce up the bouquets with some branches hacked off the trees outside, until Róis let slip that the florist was based in the leisure centre in the hotel.

Róis would normally be the first to agree the relative unimportance of flowers in the scheme of things, so I assumed the shrieking – which was gaining in momentum – was a culmination of weeks of stress. Normally, I would have given Róis a lecture about the importance standing up for herself and regularly bestowing small, expensive gifts on her best friends; then booted her arse off to give the florist a piece of my mind.

However, since it was her wedding day, I gathered up the bouquets before the shrieking hit freefall and goose-stepped off to the florist with my hair in rollers.

“I’m a bridesmaid. The bitchy one,” I introduced myself.

Kylie’s Stylist spent about an hour gathering up Róisín’s hair and coiling strands into a fabulous confection at the back. It would have taken less time, except that every time Kylie’s Stylist was poised to pin a painstakingly twisted curl into place, Róis tossed her head around.

Róis is gorgeous anyway, but looked completely, unconditionally beautiful with her dress and makeup on (well, I was Kylie’s Stylist’s prototype, so she made all her mistakes on me). Pretty much everyone asks what the dress was like – so: it was off-white satin, with an artfully draped strapless bodice. Róis retained a dressmaker, who took in the skirt to better fit her lower body and ideally achieve a Grecian Goddess style effect which would make Tim quiver at the altar with suppressed and appropriately chaste desire. When I say she was radiant, bear in mind that I only resort to cliché when there is no viable alternative.

The ceremony was held in the Trinitarian Abbey in Adare, just outside Limerick. Even though they always do on telly or in film in real life, the Roman Catholic church errs on the side of caution by not asking whether anyone present has any cause or just impediment to these two persons should not be joined together in holy matrimony.

Róis had asked Fr Tommy whether she could include one of Kahlil Gibran’s writings, on marriage. The piece has special significance to Róis and her family, and she had introduced Tim to the writings of Kahlil Gibran early in their relationship – presumably when there was nothing on at the cinema – as you do. Tim didn’t know about the rearrangement, and I caught a wonderful little moment between the newly-about-to-be-weds when Róisín’s brother Adrian commenced the reading:-

Then Almitra spoke again and said,
And what of Marriage, master?
And he answered saying:
You were born together, and together you shall be for evermore.
You shall be together when the white wings of death scatter your days.
Aye, you shall be together even in the silent memory of God.
But let there be spaces in your togetherness.
And let the winds of the heavens dance between you.

Love one another, but make not a bond of love:
Let it rather be a moving sea between the shores of your souls.
Fill each other’s cup but drink not from one cup.
Give one another of your bread but eat not from the same loaf.
Sing and dance together and be joyous, but let each one of you be alone,
Even as the strings of a lute are alone though they quiver with the same music.

Give your hearts, but not into each other’s keeping.
For only the hand of Life can contain your hearts.
And stand together yet not too near together:
For the pillars of the temple stand apart,
And the oak tree and the cypress grow not in each other’s shadow.

After the service, the rest of the 80 or so guests went to the pub while the wedding party posed for photos. Then everyone went back to the Woodlands Hotel, where the reception swiftly degenerated into drunken revelry involving seriously bad dancing 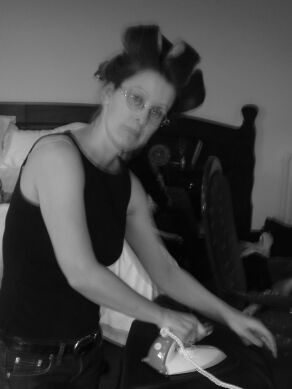 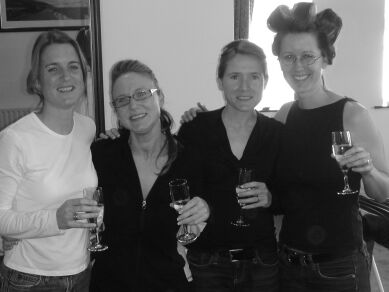 The girlies: Fiona, Róisín, Trish, me 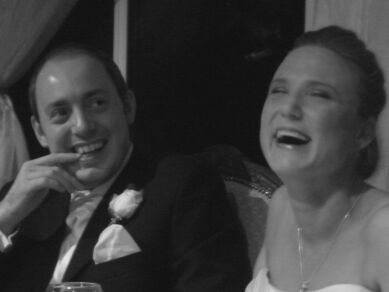 This was the view out the bedroom window this morning. I’m not sure whether the image fully captures just how WET it is. Does it? Odd that the raindrops the size of teabags didn’t come out in the photo.

There’s something wrong with my Internet connection which, by association, means my landline is poked. Internet access is erratic yet manageable, but when Husband called me last night there was a 7 second delay on the line and it sounded like he had been sniffing the highlighter pen. I mean, maybe he had, but it would be a new development.

Husband spent 40 minutes before he got through to Slingshot‘s advancedly useless customer support. I would have called them, because there are times when nothing beats banging your head off a brick wall, but of course my phone doesn’t work and mobile coverage here is non existent at the best of times. It will take Slingshot up to 48 hours to address the issue, presumably because they’re run off their feet ignoring customers 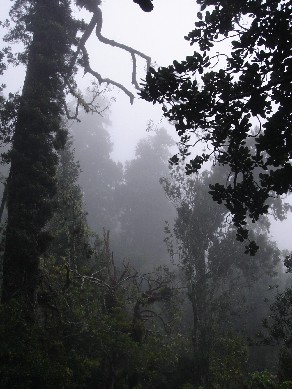